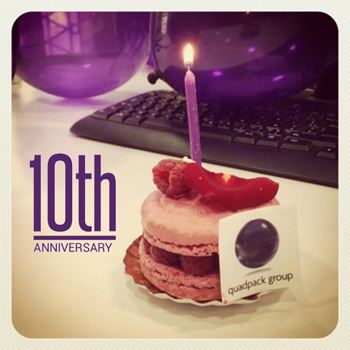 In 2003, three companies came together with a simple mission in mind: to help beauty brands perform. Ten years on, cosmetic packaging provider Quadpack Group is proud to say it’s doing that and much more besides.

14 March 2013 marked the 10th anniversary of Quadpack Group. The result of a merger between Belcos Packaging, Lenglart Packaging and Gadbrook Packaging, the company has grown from a small concern to an international enterprise in 10 short years. And what a decade it’s been!

Today, Quadpack has offices in 10 countries, including European and Asian sourcing operations. It has established and nurtured exclusive partnerships with the leading manufacturers in airless packaging, foamers, acrylic jars, fragrance bottles and make-up. It has opened a state-of-the-art test laboratory and established its own global logistics centre in Barcelona, Spain.

Quadpack has incorporated two businesses into the Quadpack fold: accessory company Spirit and wooden component manufacturer Technotraf. And it has developed literally hundreds of thousands of packaging solutions for the world’s leading beauty brands.

This year, Quadpack wants to celebrate its success. It already started at Cosmoprof Bologna, where staff shared a glass of champagne with clients and business partners on its stand. A series of anniversary activities are planned for the coming year.

Sustainability and Innovation in the spotlight

The United Nations Global Compact initiative proposes 17 Sustainable Development Goals (SDGs) that lay out a path to end extreme poverty, fight inequality and injustice and protect our planet. Quadpack has now designated the four SDGs where, as a beauty packaging provider, it can have the greatest impact.

Quadpack at Cosmoprof 2019 gets people talking

Held in Bologna, Italy every year, Cosmoprof Worldwide is one of the beauty industry’s leading trade events, covering everything from raw materials to finished products. As Quadpack grows, logically so must its presence at trade fairs, and the intent at Cosmoprof 2019 was to make the company stand bigger, better and more Wow. It worked! This year, the Quadpack stand received a record number of visitors.

Quadpack hosted its annual European Suppliers Conference in March 2019, an event that provided an opportunity for suppliers and partners to get together, learn, workshop common goals and study ways to grow together. Over 60 representatives attended the event at the historic 1898 Hotel in Barcelona.

Quadpack is a company built on people. Our skills, values, work ethic and shared vision are what drives us forward. We are today an almost 400-strong global team, expanding into new territories. Last year, we significantly increased our presence in Asia and the US. We invested €2.4 million in our production facilities. And we increased our sales by 15%, with a turnover set to hit €104 million.

Save the dates! From New York to Tokyo, Quadpack is exhibiting at a host of exhibitions worldwide throughout 2019. We hope to welcome you on our stand at these and other events.

Driving the debate on sustainability

Sustainability. Everyone is taking about it, but what does it really mean? There are many different interpretations and even more courses of action. So how can businesses best embrace it? As an active member of the beauty packaging industry, Quadpack has taken the debate to its clients, with a view to sharing knowledge and working together towards a common vision.

Quadpack is a company that depends on constant innovation, so encouraging and promoting talent is vital to what it does. Tied closely to its CSR (Corporate Social Responsibility) strategy, it works in several areas: strengthening ties between universities and industry, sponsoring relevant prizes and awards, boosting entrepreneurship and supporting small business initiatives.

Quadpack Foundation reaches out across the globe

2018 has been a busy year for Quadpack Foundation. Quadpack's charitable arm supports social and environmental projects wherever the company is present in the world, with an emphasis on helping disadvantaged children and young people get a good start in life. Throughout the year, it worked with NGOs in Europe, the US and Asia.

Cosmopack Asia: a time for partnership and celebration

Cosmopack Asia was a huge success for Quadpack this year. The YouWood collection in particular was a real crowd-puller, comprising selected Q-Line packs adorned with sustainably-sourced wood. As always, Yonwoo’s airless packs proved very popular. Quadpack also participated in the event’s SKINTONIC skincare project, plus we hosted our annual cocktail party – this year, in celebration of our 15th anniversary!

Quadpack’s department of Design and Advanced Technologies has invested over €200k in the latest 3D printing technology at its UK research & design facility. The Stratasys J750 will accelerate the early stages of bespoke package design and development, while helping to test new ideas.

Quadpack Industries announces that it will apply a gross dividend per share of €0.27, charged to the results of 2017.

The way we experience fragrance is changing. Young consumers have different expectations and want more than a nice scent in an attractive bottle. So how do we relate to fragrance and how can packagers ensure engagement with the new generation? Investigating this topic was Quadpack’s brief to the students at the ELISAVA University School of Design and Engineering in Barcelona, Spain.

Quadpack Industries delivered strong results in 2017, thanks to its diversified business model and sustainable growth strategy. EBITDA reached a healthy €6.8 million, an increase of 2% over the 2016 results. With a consolidated presence in the European skincare packaging market, 2017 saw the company increase its penetration of the fragrance and make-up markets, together now accounting for 35% of its business. Its hybrid manufacturing/sourcing model keeps its offering flexible, while delivering specialised differentiation through its own manufacturing output.

Quadpack held its Asia Supplier Conference on 8 May 2018 in Kowloon, Hong Kong, in recognition of the strategic importance of its Asian business partnerships. Held at the stylish Hotel ICON, over 30 key suppliers attended the event, as did Quadpack’s Asia Pacific team.

A new production line has been installed at the Quadpack Plastics injection-moulding plant to manage the increased volume of acrylic jar manufacture. Quadpack’s Manufacturing Division now has a combined production capacity of 170 million items a year, including the Quadpack Wood and Quadpack Impressions facilities.

Roll up, roll up! The most inclusive show's in town!

There is no surer way of putting a smile on a child’s face than a circus performance. When that child is disadvantaged through health or circumstance, it’s a way of forgetting day-to-day struggles for some much-needed fun. So when Circus Starr announced its plans to go to Stoke-on-Trent, Quadpack Foundation saw the perfect opportunity to lend a helping hand.

Quadpack ramps up US activity with new appointment, new distributor

Quadpack has made two key moves designed to increase its penetration into the US market. The company has appointed Anthony Le Minoux as head of its US operations. At the same time, it has named East Hill Industries as the official distributor of its Q-Line range of products in the United States.

Quadpack Industries has signed up to the United Nations Global Compact, the world's largest corporate sustainability initiative. The move is in line with the company’s CSR strategy and offers a set of agreed guidelines to ensure responsible governance, while helping to shape a better world.

Quadpack is proud to announce its corporate social responsibility (CSR) strategy, as it approaches its 15th anniversary. Since its foundation in 2003, it has seen a steady year-on-year growth, transforming into a thriving, global organisation. Now, with over 250 employees on four continents and an annual turnover approaching €100 million, it seeks to formally outline its commitment to responsible governance through a far-reaching CSR programme.

It was party time in Melbourne last month, as Quadpack's Australian team celebrated its 10th birthday in the illustrious setting of Eureka 89. The founders, staff, VIP clients and suppliers together raised a toast to a successful first decade.

It's a beautiful pack for a beautiful product and, now, it has been recognised by one of the industry's most prestigious associations. Tata Harper's Beautifying Face Oil, contained in a dropper pack developed by Quadpack, is the winner of the New Jersey Packaging Executives Club (NJPEC) award in the Health and Beauty category. Tata Harper Director of Product Development Amy Christian and Quadpack's Christin Cupo proudly received the prize at the Awards Gala at The Madison Hotel on 16 November in Morristown, New Jersey, US.

Quadpack Foundation works to make the world a cleaner, fairer, more beautiful place to live. Throughout 2017, Quadpack's charitable arm supported a number of social and environmental projects in Europe.