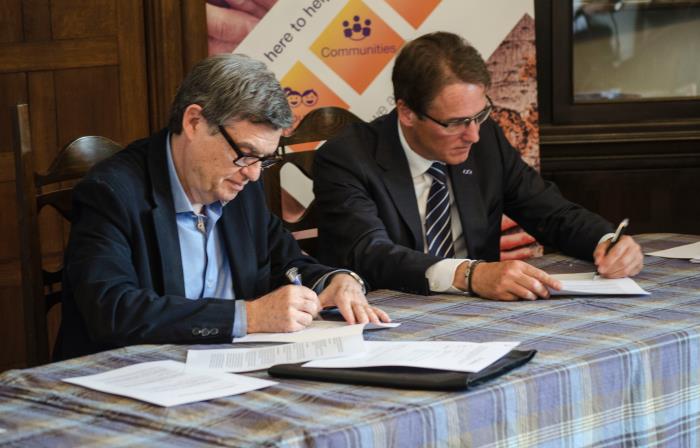 Spanish NGO La Fundació Antigua Caixa Sabadell 1859 has formally reopened the Can Deu forest in Catalonia, Spain, as part of a massive regeneration project co-supported by the Quadpack Foundation. The project is the first act to be sponsored by the new foundation, which was formed on 8th April by international packaging manufacturer and provider Quadpack Group.

"We have always strived to give back to the communities in which we operate. The formation of the Quadpack Foundation will help us formalise our support in terms of resources, planning and execution. Our objectives include boosting the local economy, assisting in the education of young people and working together with other agencies to make it happen," explained Tim Eaves, Quadpack Group CEO and president of the foundation.

In addition to sponsoring projects such as Can Deu, Quadpack will also allow staff to dedicate time and labour to help causes within the Foundation’s remit, in all areas in which it operates worldwide.

The Can Deu reforestation project came about after a storm destroyed much of the area on 9 December 2014. The forest, declared a Protected Area by the Catalonian government, is a centre for environmental education used by local schools, as well as a leisure area visited by some 150,000 people a year.

The forest's owner and manager Fundació Antigua Caixa Sabadell, in conjunction with the forestry department and volunteer associations, and with support from the Quadpack Foundation and local insurance firm Blat, is organising a three-year regeneration programme. The first phase started in January and February 2016, when 1,400 volunteers helped in the replanting of 5,000 pine and oak seedlings in an area of 15 acres. The Quadpack Foundation has pledged €27,000 over three years.

"This is a proud moment for us. We could not have wished for a more deserving venture to start our operations. The Can Deu forest is an important part of the local community and houses the Masia Can Deu museum. Young people go there to learn about sustainability and the forest's proximity to our Manufacturing Division made it a natural cause for us to support," said Eaves.

Sharing value by supporting the community

From May to July, 13 volunteers from Quadpack went to the Casal dels Infants’ headquarters, in Barcelona, to share their knowledge and professional experiences with 18 people at risk of social exclusion. While Casal dels Infants covers the behavioural component of the training, the technical subjects are taught by experts – volunteers that work in organisations like Quadpack.

Quadpack has appointed Korean packaging manufacturer LM as ‘Quadpack Official Partner’, to help accelerate its penetration of the Asian market. Along with the agreement with Yuga in China announced in February, Quadpack is establishing partnerships in a new, regional operating model designed to help build the Quadpack brand.

Smart manufacturing is opening a whole new world of opportunities for Quadpack. After months of pilot tests, the beauty packaging manufacturer and provider is launching its Industry 4.0 project at the Quadpack Wood plant. The wooden components factory now has 63 machines connected by Internet of Things (IoT) devices that will provide real-time data, giving process visibility and efficiency control of the equipment.

Quadpack’s sustainability performance rated highly in the 2021 Annual Report of the Australian Packaging Covenant Organisation. The score reflects the implementation of Quadpack's sustainability strategy, a new framework set in motion at the start of 2020.

New investments put Quadpack at the forefront of smart manufacturing

Increased manufacturing capabilities are one of Quadpack’s priorities for the next four years. By 2025, the beauty packaging provider aims to lead innovations in airless and sustainable products, offering solutions “in the region, for the region”. With a clear strategy and a roadmap in mind, Quadpack’s Operations team has the mission of strengthening its industrial capacity through ambitious investments that are being globally deployed.

Packaging with a positive impact on people and the planet

Sustainability is a long-term commitment with innovation, transparency and change. As a packaging manufacturer and provider, Quadpack is directing the sustainable transformation of its portfolio through its ‘positive-impact packaging’ strategy. By using data-based assessment tools to measure products’ carbon footprint, circularity and other key performance indicators, the strategy brings more accountability to Quadpack’s sustainable innovations.

Quadpack sets its sights on China with Yuga partnership

The growth of the Chinese cosmetics industry has prompted Quadpack to commence a commercial push into the domestic market. An agreement with long-term partner Yuga will allow Quadpack to offer its Q-Line range to brands seeking the quality, performance and distinction of products ‘Made in Europe’.

2021: It’s time to embrace the change and build a better future for all our stakeholders!

2020 came as a ‘stress test’ to all businesses and industries, ours being no exception. The challenges, however, helped us evolve as a business and as individuals. As the year draws to a close, I’m grateful to our team, our clients, our banks and our partners for what 2020 brought us: more resilience, collaboration and empathy.

As part of its commitment to youth and environmental causes, Quadpack increased donations to the foundation for the fifth consecutive year, reaching one per cent of its EBITDA and bringing positive impact to more than 43,000 lives.

Sulapac: the first year of a successful partnership

Quadpack celebrates the anniversary of an innovative agreement that aims to have a positive impact on the planet. On its first anniversary, there is much to celebrate.

Lead the change and inspire others, bringing positive impact to our people, communities, providers and partners. In a nutshell, this is the objective of ‘positive-impact people’, the human-centred axis of Quadpack’s sustainability strategy.

Sustainability is not an option. Consumers demand safer, cleaner solutions for themselves and the environment. Quadpack aims to lead the change in sustainable manufacturing and supply through its positive-impact processes.

Louvrette one year on: a successful journey

What happens when German engineering excellence meets creativity born in Barcelona? A raft of innovative solutions, developed, produced and delivered in a way that’s sustainable, creative and efficient. That is just one of the outcomes of the rare but successful ‘marriage’ between German manufacturer Louvrette and Quadpack. A lot has happened in the year since the acquisition, which pushed Quadpack into the Top 10 of European beauty packaging providers.

The beauty industry has always relied on the senses to promote its products: touching, seeing, smelling and trying a product has been an integral part of sales and marketing strategies. Until now. Webinars and online exhibitions have boomed in 2020 and brought more ways to interact with customers and partners.

In a new world marked by changing behaviours and conscious consumerism, needs and market demands, businesses are increasingly governed by ESG (environmental, social and governance) standards. For years, Quadpack has been committed to these three factors that measure the environmental and societal impact of a company.

September 2020 is a watershed in the history of Quadpack Wood. This month, the wood components factory based in Torelló, Spain, takes an important step towards carbon neutrality, thanks to a new biomass plant.

Youth innovation at its best

The co-creation of a sustainable ‘on-the-go’ product with a design student from Nottingham Trent University is the perfect example of how Quadpack fosters and collaborates with young talent.

On 1st of June, 2020, Quadpack started operating in Japan, with the opening of a commercial office. With a strong presence in the Asia Pacific region, with facilities in Australia, China mainland, Hong Kong, Taiwan and Korea, Quadpack lands in Japan with high expectations about one of the most promising markets for the beauty packaging industry.

Thanks to our people’s talent and our partners’ resourcefulness, we’re now part of a task force against the virus that is bringing out the best in us. Some of our projects are already in place, supporting health care and other COVID-19 frontline workers.

Quadpack has held an EcoVadis Silver Medal since 2018, which means the organisation complies with the highest standards of CSR, covering environment, labour & human rights, ethics and sustainable procurement. By joining the Buyer Module, Quadpack will also be able to conduct the assessment and follow the evolution of all its suppliers, globally.

Beauty industries committed to sustainability, we have good news for you! Quadpack has just been named a “Preferred Cosmetic Partner” by Sulapac, a pioneer in development and manufacturing of microplastic-free materials, and will provide truly sustainable packaging for cosmetic customers worldwide.

Technology has been at the heart of Quadpack’s global expansion. In recent years, organic and inorganic growth posed many challenges for processes, data and system harmonisation throughout the business, so the organisation has opted for a bold digital transformation strategy that will support its future evolution: Quadpack Connect.